The selection of paintings includes new cityscapes and streetscenes, with an emphasis on views London and Italy. It also features a series of Michael Alford’s alla prima oil sketches, exhibited in public for the very first time.

Paintings are available for off-catalogue purchase now. Please contact Wimbledon Fine Art for prices and availability. Sizes are in inches. 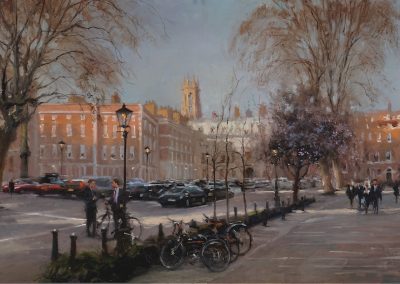 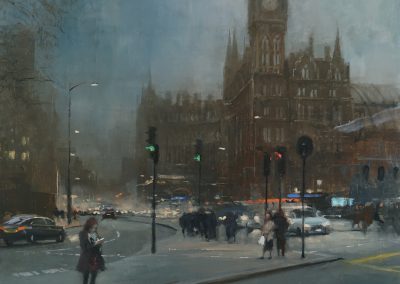 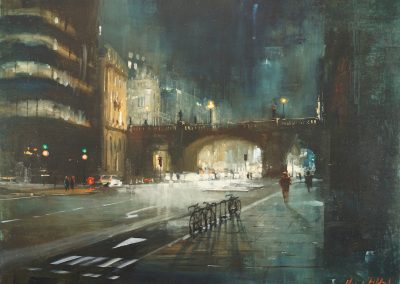 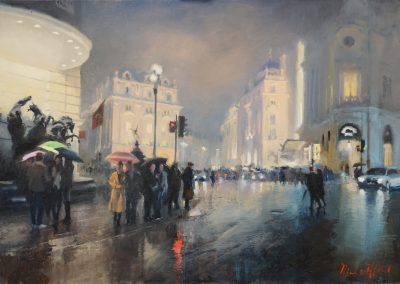 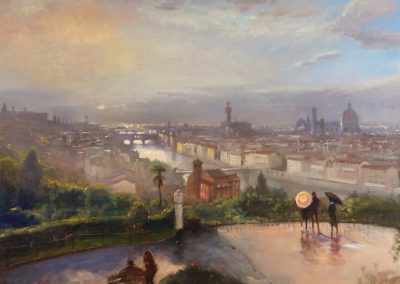 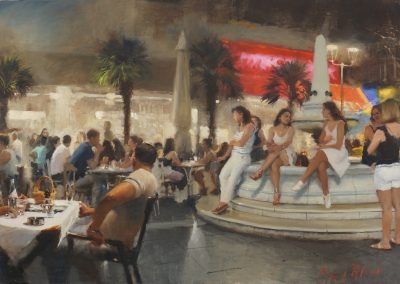 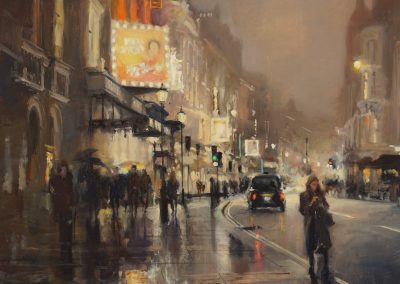 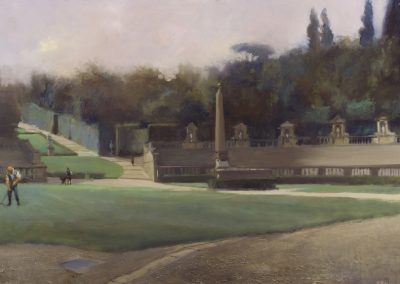 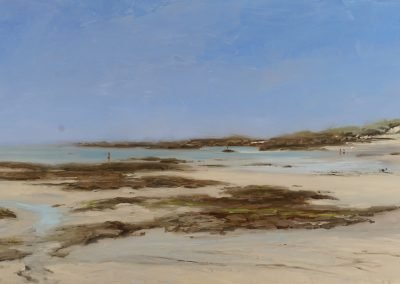 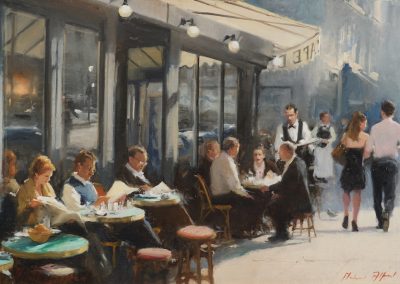 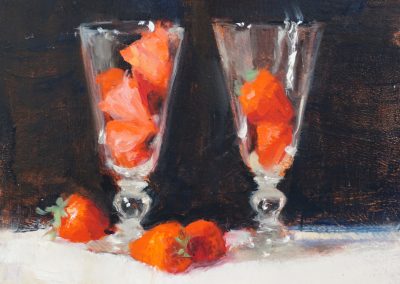 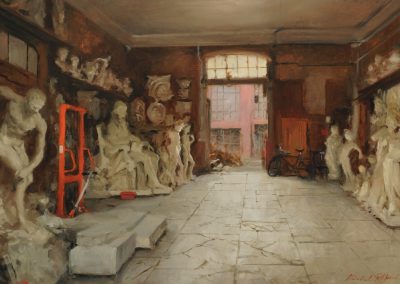 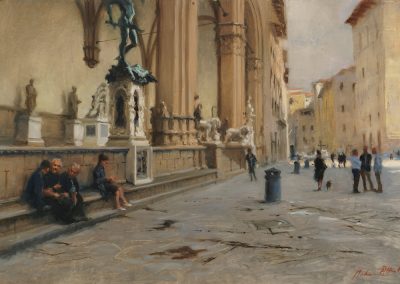 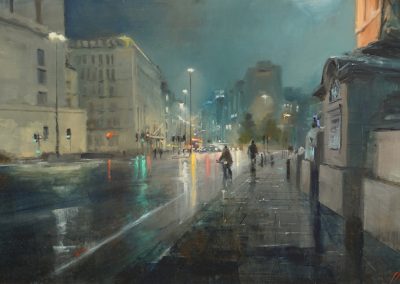 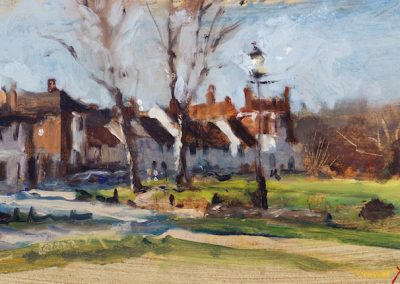 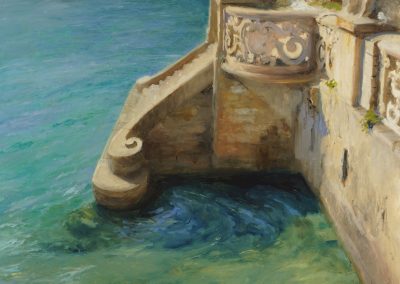 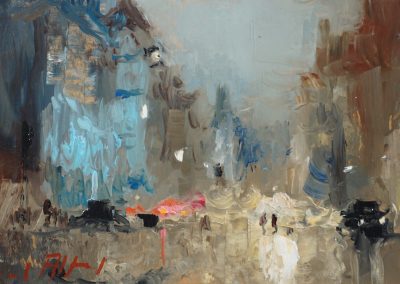 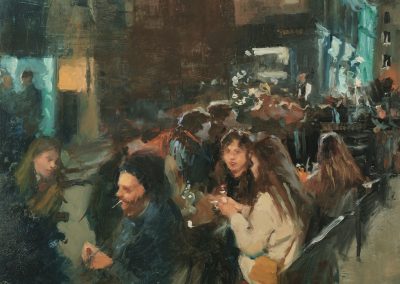 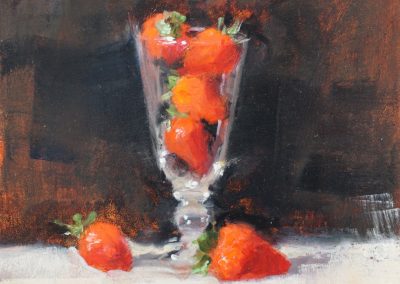 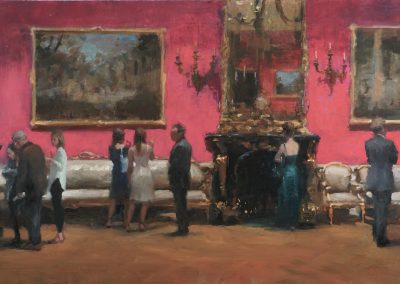 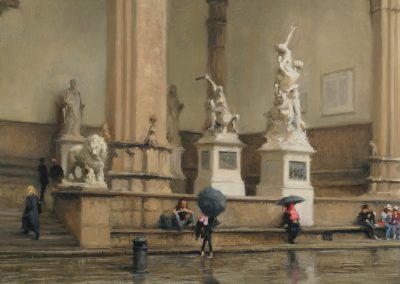 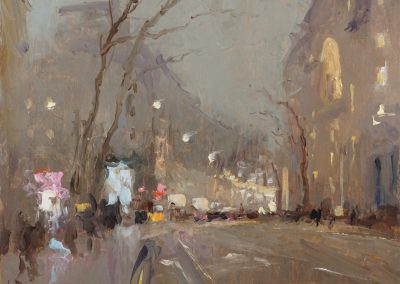 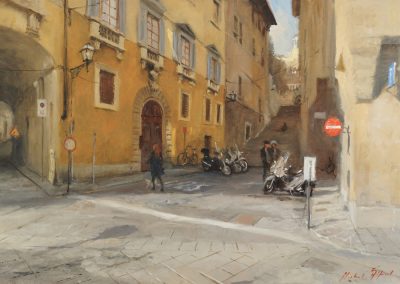 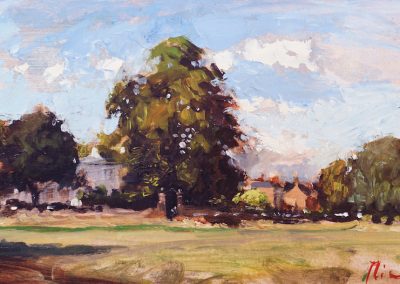 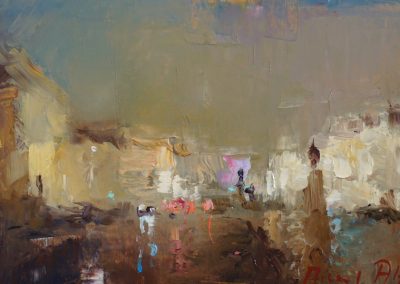 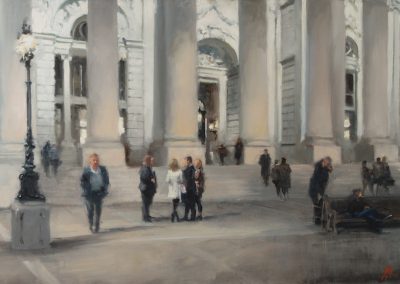 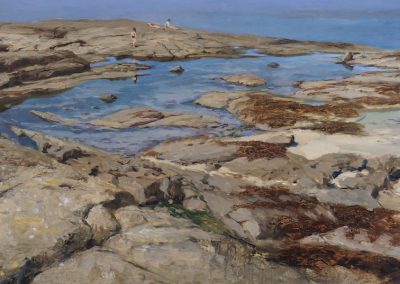 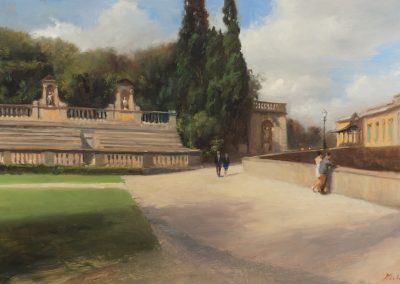 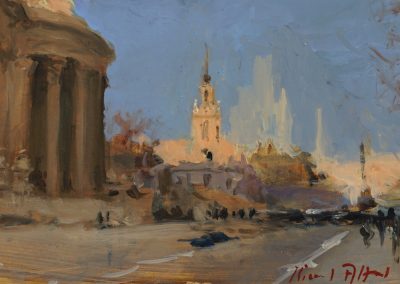 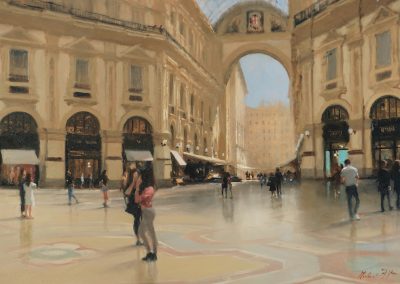 The paintings in this exhibition divide themselves into two distinct types: There are the large oil paintings, mainly cityscapes and street scenes, and then there is a series of small, alla prima oil sketches.

London
The large paintings were all painted in 2020 -21 and they reflect my experience of that time, which was unusual in so many ways and left me with specific artistic challenges. A number of the paintings depict scenes of London, a subject I never tire of. Yet I found it difficult to paint the city during the pandemic.

One reason was because the streets were empty of people. The absence of life could have made my task easier—it was simplifying, in a sense—but I’m not generally interested in uninhabited or inanimate cities. My cityscapes are fundamentally humanscapes: the architecture serves as a frame and ground for the figures, the human element, who are the real subject as well as the source life for any city. Another problem was that London’s public buildings, all normally brightly lit at night, were kept dark during lockdown, so the atmosphere was much gloomier than normal.

My solution was to seek out views and moments that hint at the city’s suppressed vitality. I didn’t make any attempt to represent a particular view of London during this time or to treat the subject in any commemorative way. Some of the pictures celebrate a more populated world, rather than a depopulated one. They focus on the return to life because that is what attracts me most from an artistic perspective.

Italy
Several of the paintings have their origins in a work trip I was able to take to Italy in May of this year. There were still considerable travel restrictions in place at the time and the country was emptier than I have ever seen it. Happily, the Italians were out and about, resuming their lives as normal, but there were still practically no tourists at all.

Because of this, I had very fortunate near-exclusive access to places that would normally be completely swamped by huge crowds: Bergamo, Milan, Pietrasanta (near Carrara; Michelangelo worked there) and, above all, Florence.

It was a unique opportunity and a privilege for a painter. These places are so iconic, their views have been painted so many times by so many artists, that it can be hard to see them through new eyes. The unusual circumstances helped me see them afresh and I was hugely inspired by the excitement of having new subjects to paint after having been in England for such a long time.

Oil Sketches
This is the first time I’ve ever exhibited a selection of my alla prima oil sketches. I paint them for myself, normally, either as preparatory sketches for larger paintings or sometimes on the spur of the moment, just because the mood takes me. I keep them in the studio for reference.

I usually paint the sketches in situ on small boards in oils using a travelling easel. I often use fast-drying paints and work rapidly with the aim of capturing changing conditions of light. The sketches are things of a moment, dashed off at speed. They work as mnemonics to help me remember details of a scene or moment and are extremely useful for producing larger work.

Sketches are risky things; they don’t always work out. The whole process of painting outside is challenging and there are often problems, like changing light, uncooperative weather and stuff getting in the way. But sketches are fun and exciting because of these challenges. I have to be more fluid with them and use very different skills than I do when painting in the studio: decisive mark-making, making use of a restricted palette, and drawing with the brush instead of doing preparatory underdrawing. You can’t spend too long on any particular sketch so an image has to be approached as a whole rather than by discrete areas.