Commemorating Gurkha Service in the Falklands

The Taking of Mt. William: The 7th Gurkha Regiment Celebrates Its Proud History With a Painting by Michael Alford

were The 40th anniversary of the Falklands War was a milestone for the military personnel who served in that conflict. The Brigade of Gurkhas chose to commemorate its participation by commissioning a painting from artist Michael Alford. The subject was the 7th Gurkha Rifles taking of Mt. William on June 13-14th, 1982.

Colonel Mike Kefford OBE, chairman of the 7th Duke of Edinburgh’s Own Gurkha Rifles Regimental Association, liaised with Alford on behalf of the painting committee. Their initial conversation involved sketching pictures on napkins over tea while Kefford, who was company commander on the day of the action, described battle positions and provided topographical details about Mt. William and its near neighbour, the notorious Mt. Tumbledown.

Kefford was able to supply Alford with a great deal of first-hand information but few visual references: only a handful black and white snapshots were taken on the approach to the battle. Though grainy, these photos vividly convey the miserable weather conditions and punishing terrain the Gurkhas had to contend with. What they don’t show, however, is the battle itself, which took place by night under conditions that made photography impossible.

Alford’s challenge was to create a convincing representation of the battle starting with very few visual guides. He realized that getting the terrain right would be of prime importance—indeed, the committee selected Alford on the strength of his landscape painting. He set about researching the topography using satellite and 3-D imaging, helped by a detailed map prepared by another member of the committee who was present during the fighting.

Lighting the night scene was a further technical challenge. Alford solved it by including star shell bursts, orange tracer and artillery fire. To avoid any hint of exaggeration, he relied on the memory of participants to strike a balance between authenticity and the visual effect he needed to make the painting work.

Figures of the Gurkha fighters were always intended to be the picture’s main focus. Here, too, the night setting threw up challenges. How to make them easily recognisable in near darkness?

Alford started with the kit. Trained as a Royal Marine in his youth, he was already familiar with the fighting order and knew how it was worn on the body. Input from the committee helped him pin down further distinctive details, such as the right model of mortar and shells for the figure group in the foreground. Careful positioning of the foreground figures allowed him to highlight the soldiers’ signature kukri knives, identifying them as Gurkhas.

With the main difficulties worked out, Alford submitted a series of sketches to the committee, received their feedback and made further adjustments to the design. The finished picture was unveiled at a ceremony at Sandhurst on 4 June, 2022. The original painting will be housed in the Gurkha Museum in Winchester, with high-quality prints available by special order. 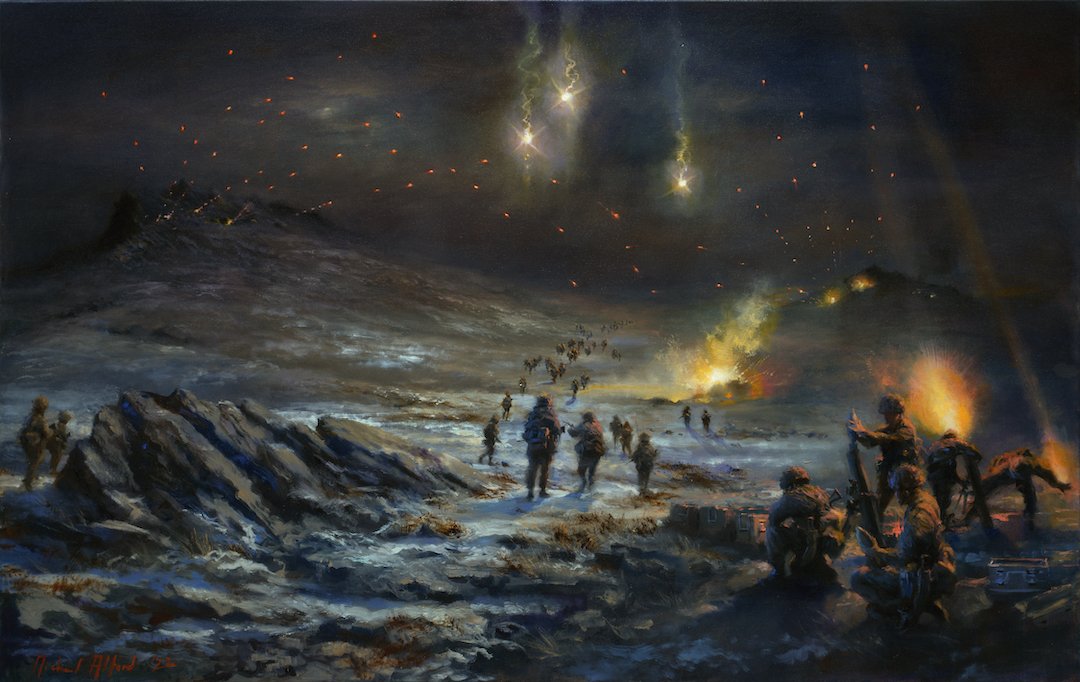 1st Battalion 7th Duke of Edinburgh’s Own Gurkha Rifles, the Falklands War.
Below Mount Tumbledown During the Approach to the Assault on Mount William, 13-14 June, 1982